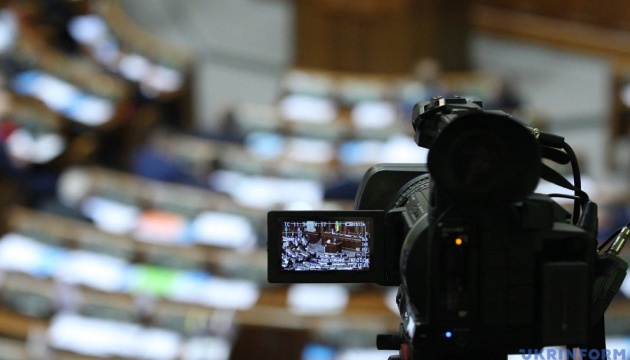 May 19 – Parliament has sent draft law # 2693 “On Media” for further amendment and repeated first reading. This decision was supported by 278 MPs, while 23 Opposition Platform – For Life MPs voted against, and 17 MPs abstained. With this vote, parliament supported the recommendation of the Committee for Humanitarian and Information Policy for the law to undergo a second first reading to address the need for new amendments.

Chair of the Committee Olexandr Tkachenko told journalists just after the parliamentary session that: “There were many discussions about this law. Dozens of appeals were submitted to the Committee by the media industry, and there was a three-day video conference with the Council of Europe. This law needs a number of structural changes in parts of the National Council’s powers, regulation of online media, and adjustment of community broadcasting to the European audiovisual standards.” Tkachenko also mentioned that his Committee received a lot of negative reactions regarding the inclusion of language on dealing with hate speech.

Bill #2693 “On Media,” which was registered in parliament on December 27, 2019, is designed to be a comprehensive document that will replace several old media laws. The bill proposes to regulate online media, bloggers and various global web platforms (such as Netflix and Facebook). The law also envisions mechanisms for media co-regulation. A separate section of the bill focuses on community media – the third sector of broadcasting which exists in Europe alongside public and commercial media.

The powers of the regulator – the National Council for TV and Radio Broadcasting – will also expand under the new law. The National Council will have the right to suspend broadcasting if the law is violated. According to the bill, online media may be fined from one to five minimum salaries in Ukraine (from 4,700-23,500 hryvnia, which is between US$145 -$870), or access to online resources through internet providers may be blocked. The law also contains a Ukrainian language quota of 25% of total programming, with a quota for European audiovisual products of 30%.