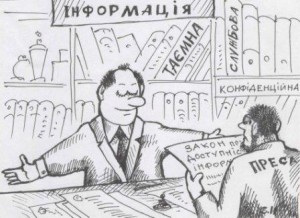 June 9 – Facts and assertions from the “Schemes” investigative television program that showed Security Service of Ukraine (SSU) officers owning luxury automobiles are now a part of an SSU internal investigation, according to the official response to “Schemes” journalists’ requests for income information of SSU officers covered in the story. The SSU response was signed by Olena Hitlianska, head of its public relations department. No income inspection timeline was provided in the SSU response to “Schemes.”

On June 1, the “Schemes” television program broadcast an investigation into officers working for the SSU’s Main Department of Counter Intelligence for Protection of State Interests in Economic Security who own luxury cars well beyond the means of their modest state salaries. An hour before the story was aired, the SSU requested changes in the “Schemes” story content to hide the faces of the featured SSU officers. Following the broadcast, the SSU said its lawyers would analyze what it said were violations of Ukrainian law (in terms of dissemination of false information) by the “Schemes” program.

“Schemes” is a joint project of UA: Pershy and Radio Liberty.

More on Radio Liberty in Ukrainian.