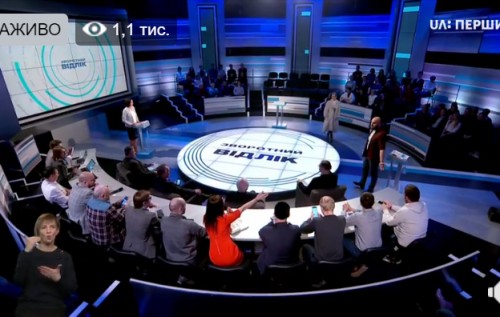 October 21 – Myroslava Barchuk, anchor of the public service broadcaster’s “Countdown” current affairs talk show, posted on Facebook that the Office of the President of Ukraine (OPU) was trying to interfere with the show’s editorial policy by insisting on changes to the list of guests for the show. Barchuk complained about the level of control exercised by the OPU in selecting Servant of the People candidates to participate in episodes of the critically acclaimed talk show.

Barchuk’s post was shared on Facebook 1,200 times and garnered significant public attention. Pryamyi TV channel, which is owned by former President Poroshenko, issued a statement in support of the public broadcaster’s journalists and claimed Pryamyi experienced the same OPU treatment of interfering with show guest selection.

President Volodymyr Zelenskyi was asked about Barchuk’s statement during a visit to Zolotonosha (Cherkasy region). He improvised ironically that it was strange to suggest that “state TV could be pressured by the state” (indicating a lack of acknowledgement of the transformation from state to public broadcasting), said MPs are free to participate in any shows they prefer, and denied there was any pressure from his office.

OPU Advisor Mykhailo Podoliak called Barchuk’s post “emotional” and inaccurate regarding any special attitude of the authorities towards the public service broadcaster.

Svitlana Ostapa, head of the UA:PBC supervisory board, reacted by saying that “the selection of the show topics and invitation of guests are the responsibilities of the program’s editorial team.” Ostapa confirmed that representatives of the Servant of the People party refused to participate in the “Countdown” show on Monday, October 18, if MP Geros was there. Ostapa said it was possible that this was their own decision, rather than a directive from the Office of the President.

Natalia Ligacheva, head of Detector Media, reminded her followers on Facebook that Detector Media monitoring shows that “Countdown” remains the most independent high-quality political talk show on Ukrainian TV. She supported Barchuk in her complaint.

“Countdown” is produced with the support of the USAID Media Program in Ukraine, which is implemented by Internews.